So, I don’t think that I have actually done an update post since I posted that I was in fact pregnant.. I have definitely meant to but life has been getting in the way quite a bit lately. Anyway…

We found out early on that we were pregnant and it has been an adventure, to say the least, since then! I started out having really bad nausea – I even had to gag down water because it was hard to even drink anything, let alone eat. It has been rough throughout the whole pregnancy thus far trying to eat and maintain that healthy balance of making sure I eat enough but not too much because then I get sick.

So, we are having our third girl! No, we will not be trying for a boy – so leave those comments to yourself. Yes, we would have LOVED to have a boy but that was not what was planned for us. We’ve got two girls already and God felt that we were doing a well enough job with them that he would bless us with another little girl. Girls are fun as I am sure boys are, too. I know girls, I’m comfortable raising girls.. so I will survive.. Although some days I wonder just HOW I will survive three kids. LOL!

This pregnancy has been FAR different than my other two. With A I had a relatively easy pregnancy – no pains, no uncomforatbleness, and mild nausea. I was put on bedrest with her at 28 weeks up until I had her at 35 weeks because the doctor didn’t think she was growing up to the “norm” but she was great! With S I had a more painful pregnancy and got so much bigger than I did with A. At 23 weeks pregnant with S I was the same size as I was the day I went into labor with A. So, needless to say I was pretty uncomfortable for much of that pregnancy. Not to mention, she sent me to the hospital 6 times thinking I was in labor before I actually was in legit labor. Seventh times a charm, eh? LOL. With S I experienced sciatic nerve pain and round ligament pain, both of which are pretty common with pregnancy. They were more annoying than painful up until the end and then everything just hurt.

This time, though.. I have sciatic nerve pain, round ligament pain, and SPD. SPD is symphysis pubis dysfunction. In easier terms it means that I have swelling and pain that caused my sympysis pubic joint to become less stable. It’s hard to explain to someone who has never had it but it is something that I would never ever wish on anyone. It hurts. So. Fucking. Bad. Excuse my language, but it does. It is a sharp, very painful pain in your pubic bone when you move. Walking, sitting, standing, getting in & out of your car or bed, rolling over in bed.. EVERY movement hurts. I have to have help getting up from sitting down, rolling over in bed, getting out of bed, getting out of the bath.. all which can be pretty normal in pregnancy but it’s not because I can’t get up it’s because moving in any way feels like my pelvis is being torn in half and it literally brings tears to my eyes. Here’s a picture of what it looks like.. I’m not sure how helpful this will be but here ya go! 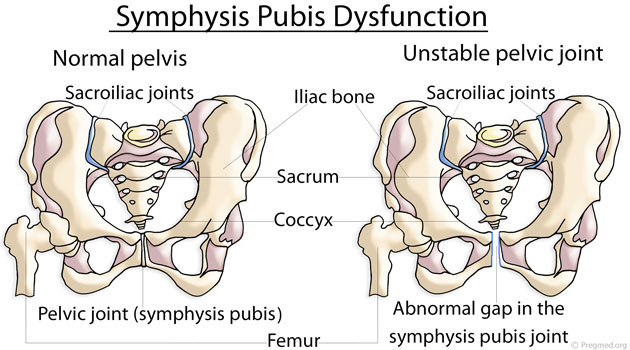 This is a big reason as to why we are not having any more. I’m not sure if it’s because this is my third, because I am older, or what.. but the pain is unbearable and anyone that has had SPD will agree with me.

Last week was quite interesting, to say the least. I was scheduled to do my gestational diabetes test on Friday so I grab the drink out of my fridge and get on my way to the doctor’s office. About halfway there I realize it’s time to drink the drink so I drink it. No big deal, it wasn’t that bad. Tasted like flat orange crush. Well, three minutes later it came right back up.. all over me and my car. It was lovely. I called my OB to see if she still wanted me to come in or if she wanted me to reschedule because it didn’t stay down long enough to make any type of difference. She asked me to come in anyway and they ended up taking my blood and said that we would decide what’s next when my results came back in. So, I guess we shall see what happens next.

We’ve chosen a name, we’ve actually had it picked out before we even got pregnant. Her initials will be E.M.D. and we will not be sharing her name until we give birth. We’ve gotten lots of negative remarks about this but that’s what we had decided to do and since she’s our baby.. we get that right. We have told our parents and siblings her name and a very select few friends but everyone else has to wait until she’s born to know her name. -shrug-

I guess that’s the end of our update. This pregnancy hasn’t been eventful, just painful.

Hey y’all! My name is Lena. I am a southern mom & wife. My three daughters Autumn, Sophia, and Elyssandra, are my life – my reasons for breathing. I’m married to their daddy & my best friend. What began as a high school romance is now my fairytale love story – but it didn’t come easy. We are a homeschool family and have been doing so for five years now. It hasn't always been an easy adventure but it is truly what's best for our family so we continue to push through the ups and downs.