My morning started pretty bright & early! Ellie decided it was time to wake & play then Sophia woke up not much later. We got some cuddles in and once Autumn was awake we made breakfast and put in a movie.

Around 10:30 I got all of us dressed so that we could head out to run some errands and get some park time in before heading to Autumn’s ninja class in the evening. Finally at like noon we were in the car & ready to go. I swear getting myself & three kids around us no joke. Much harder than it was for two kids, for me.

Our first stop was the post office! I had to send some stuff out & fix a previous issue with a package. -face palm- My mom brain has been at 100% lately. While there I stood there waiting for the lady in front of me to be done with her transactions so that I could ask for a pen.. there was a whole flower pot of flowers in front of where I was filling out address labels. 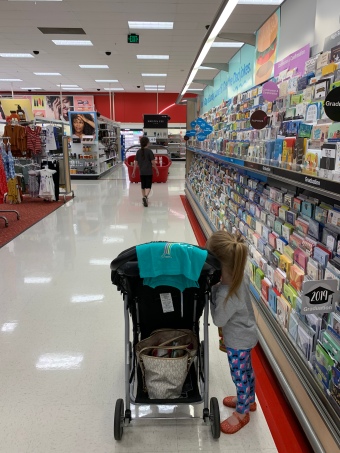 Our next stop was Target! Duh! The weather report when we left said it was 68 so I put Ellie in a thicker long sleeve shirt. But by the time we were out & about and done it was closer to 75 so I stopped in to grab her a short sleeve shirt and a few other things. 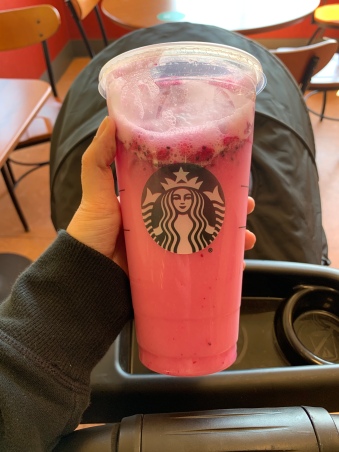 And of course when you’re at Target you have to stop at Starbucks. Lol! This is one of my new favorites! It’s the Dragon Drink! I am not a fan of mangoes but this is amazing! I definitely recommend! It also comes as a refresher with water instead of coconut milk but I personally prefer the coconut milk.

For lunch we grabbed Little Ceasers and took it to the park to eat! Quick, easy, and yummy! Even Ellie had some & loved it!

The park was kind of a bust because the side the girls normally play on was under construction so they could only play on the little kids side (under 5 years old) and Autumn got bored pretty quick. Sophia, on the other hand, had a lot of fun and there were a couple other kids her age to play with while Autumn read a book instead.

4:00 pm We left the park around 3:30 to head to Autumn’s ninja class. She does ninja once a week as an extracurricular activity and gets to spend some time with other kids doing things they enjoy and have in common. This is her second year taking these classes and she thoroughly enjoys them and gets upset when we have to miss them for one reason or another.

We got home a little after 5 and just hung out until my husband got home from work. The rest of the night was a pretty chill evening. We had leftovers for dinner and the girls did their own things. Autumn watched a movie and Sophia and Chris played LEGO Worlds for a bit. Then it was bed time but they didn’t go to bed at their bedtime. I was going to be up anyway so I let them stay up and they played a game together for a bit.

While they played their game I started setting up this blog post and played with Ellie. She’s been fighting her sleep lately so it’s been frustrating at night in our house. Autumn and Sophia were both asleep around 10:30 and I was finally asleep somewhere around 1 am. -face palm-

I hope you enjoyed a peek into our day! What is something you’d like to see me talk about on here?

2 thoughts on “Day In The Life”