indulge in enjoyable recollection of past events.

Often times I find myself thinking back to when I was much younger, before my grandparents died, and how good things used to be. Of course I wouldn’t change how my life is now, I just wish I could still be creating memories with them and my own children. It is hard, for me, to think of the good without also thinking of the bad. In this particular case the negative is that they are no longer here and cannot be a part of my, or my kids’, lives. My kids never got to meet my grandpa and although Autumn has met my grandma she was 5 months old and doesn’t remember her. It is very hard knowing that my kids will never meet them but I also know that they have amazing grandparents of their own that they do get to grow up with.

But is it good or healthy for us to reflect back?

I have heard this answered both ways, that it is both good and bad for us. I, personally, stand somewhere in the middle of that. I think that it can be healthy for us to look back and reflect on positive memories that we have from our past. However, I also know from personal experience that this can cause pain as well and I will be sharing that later. Most of mine are positive but I do have days where negativity overshadows it all. This holds true for most people that I have spoken to about this.

When my husband and I were discussing divorce and trying to figure out what we both needed, wanted, and what was best for our girls it brought me back to negative times. There were nights where all I could think about was growing up in a broken home, not having my dad in my life, and everything else that collapsed on top of me. These memories flooded my brain every night and it put me into a very low place. I began imagining what my girls would say later in life, thinking about all the ways it could and would affect them in both situations. That first month or so was a never ending nightmare, or so it seemed.

I kept repeating that to myself. Not in terms of before kids. More so in terms of how our relationship used to be. It used to be so easy for us. We meshed well together, never fought, etcetera. Then something changed and divorce was brought up.

We started arguing over the smallest things, we became distant, hardly talked. It sucked. My best friend viewed me as more his roommate than his wife. I felt like a complete failure even though we both contributed to the underlying issue.

Neither one of us wanted to admit things had gotten as bad as they had but eventually we had to accept that they had and figure out how we would make it better. This was almost harder than the initial divorce conversation. I had so many tie ups with my past that I was carrying over into my marriage and I had to figure out how to cut those ties, end the chapter, and close the book so that I could work on the next.

All of that vulnerability for me to say that during that time in my life I was reflecting a lot on what I knew of marriages. I took what I wanted from that and applied it to my own marriage and how I wanted my marriage to look. I focused on my grandparents marriage. They were in love, happy, and devoted to each other. It’s hard to describe it but it’s what I imagine a perfect marriage as.

Not all reminiscing is bad but it’s not always good, either. It is important to stay true to yourself when you look back at your past and remember the good and keep in mind that it is okay to remember the bad that went along with it. Just don’t get so tied up in the bad that it overshadows all your positive memories. 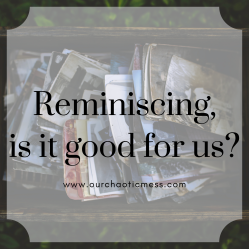